SGD is the perfect algorithm for use in online learning. Except it has one major drawback – is sensitive to feature scaling.

In some of my trials with the SGD learner in scikit-learn, I have seen terrible performance if I don’t do feature scaling.

Which begs the question – How does VW do feature scaling ? After all VW does online learning.

It seems VW uses a kind of SGD that is scale variant:

Do a simple search on Google –  ‘how do bandit algorithms work’ ?

Do the results look confusing ?  Some links (here1, here2) say they are better than A/B.  Then there are other links which say otherwise (here3, here4).

In fact, when one hears about Bandit Problems, there are couple of questions to think about:

1.Is it an ‘Experiment Strategy’ ?

3. Where do the algorithms like epsilon-greedy, UCB etc fit into ?

As I play around more with the machine learning toolkit Vowpal Wabbit, I realized there are several subtle flags/functionality in the toolkit.

Here is an effort to aggregate my leanings in using this toolkit.

In a previous post, I had mentioned about ML Reductions in general.

For the specific case of Contextual bandit class of problems, there are 2 seminal papers. This goes hand in hand with the counterfactual evaluation and learning problem which i have discussed in other posts (here, here)

I came across this very interesting talk by some folks at Cornell on Counterfactual Evaluation.

We have a system running Multi-Armed Bandit.

So when it came to select the next generation of ML algo to try out, we had a few choices:

Interestingly, on the dataset I was using I didn’t see much of a difference in algorithmic performance across the 4 different algorithms above. 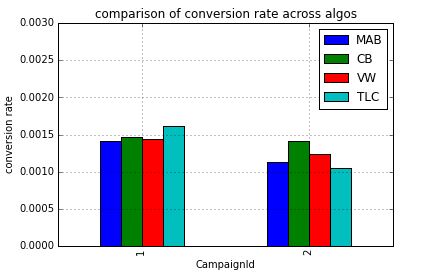 I was recently reading this paper which discusses Machine Learning Reductions.

It has a very interesting Abstract which got me hooked. The references contains two papers which explain ML reductions in general.

“Machine learning involves optimizing a loss function on unlabeled data points given examples of labeled data points, where the loss function measures the performance of a learning algorithm. We give an overview of techniques, called reductions, for converting a problem of minimizing one loss function into a problem of minimizing another, simpler loss function. This tutorial discusses how to create robust reductions that perform well in practice. The reductions discussed here can be used to solve any supervised learning problem with a standard binary classification or regression algorithm available in any machine learning toolkit. We also discuss common design flaws in folklore reductions.”

Its interesting to note down the different flavors of multi-class classification.

I have been trying to understand contextual bandit (CB) algorithms. I am using VW where CB is implemented natively.

Here are some insights about the bandit algorithms.